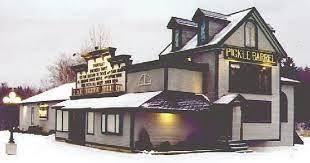 What began as a rustic dance hall in the 1960’s has evolved into one of the Northeast’s premier concert venues, and Killington’s largest night club. The Sugar Shack, as it was first known, offered a gathering place for locals when the Killington Ski Area was still in its infancy. As the Showcase East, it served libations and movies, until local entrepreneur Jack Giguere acquired it in 1971 by crashing his car through the front door. Jack repaired the entrance, renamed the club, and redefined the entertainment scene in Central Vermont.

In 1999, longtime manager and Giguere’s protégé Chris Karr purchased the night club, and once again the storied building was re-energized and re-branded as The House That Rocks Killington. The historic building was carefully restored, incorporating many architectural elements to the interior décor. State-of-the art audio and lighting systems create an electrifying ambience that fuses with the spirit of the past.

For over three decades, the Pickle Barrel has set the standard for live music in the region, hosting the biggest names on the concert circuit, as well as introducing fresh, new voices that are on the verge of making it big. Ski Magazine called us a “Living Legend” and a “Classic.” Snow Country Magazine ranked us one of the Top 5 Favorite Bars in North America. With our 4 bars, 3 levels and 2 stages, the Pickle Barrel is your ticket to the best nightlife Killington has to offer.