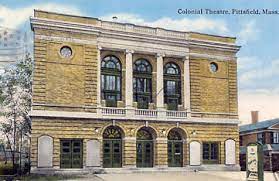 The Colonial Theatre was named by First Lady Hillary Clinton as a National Historic Treasure in 1998. She later visited the theatre as a U.S. Senator in 2000.

Following this announcement, the community invested more than $22 million to refurbish the 100-year-old Colonial Theatre, one of the only theaters of its kind from the Vaudeville age, described as the “one of the finest acoustical theaters in the world.”

The Colonial Theatre Restoration completed work in 2006 and it is now open to the public.

Many notable performers have since performed here, including James Taylor, the Lovin’ Spoonful, and other musical and theater acts.